‘If you’re gonna do it, do it right,’ he says in rejecting decriminalization proposal 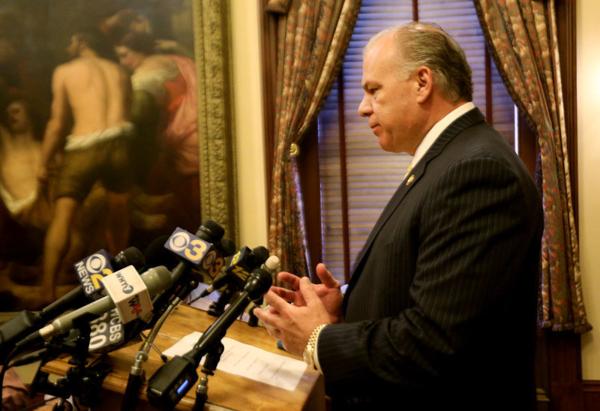 Samantha Marcus and Brent Johnson
For The Star-Ledger

Don’t expect New Jersey to decriminalize recreational marijuana instead of legalizing it. The state’s top lawmaker, state Senate President Stephen Sweeney, said Monday that he’s opposed to a bill that would simply fine those caught with small amounts of pot, similar to traffic offenses.

“I really don’t have an interest in it,” Sweeney, D-Gloucester, told NJ Advance Media. “I don’t see it moving forward at this time. You’re basically legalizing something that’s not legal now. If you’re gonna do it, do it right. Regulate it and manage it properly.”

Politico New Jersey was the first to report on Sweeney’s stance.

Gov. Phil Murphy, a Democrat, has vowed to legalize marijuana to generate new tax revenue and cut down on incarceration, especially of minorities. Sweeney is also a proponent of legal weed.

But many Democrats and Republicans are either against or undecided on the idea. The decriminalization bill — sponsored by state Sens. Ronald Rice, D-Essex, and Robert Singer, R-Ocean — is a compromise from those who are opposed.

Under the measure, a person caught with less than 10 grams of cannabis would face a fine of $100 the first time, $200 for the second offense, and $500 for future violations.

Currently, offenders are subject to six months in jail, a $500 fine, or both.

“No one should be a convicted criminal and not be able to get a job because they had a small amount of marijuana,” Bramnick said.

But both the Senate and Assembly would have to approve decriminalization for it to move forward. And if Sweeney won’t post the bill, that means it won’t advance.

State Senate Minority Leader Tom Kean Jr., R-Union, said Monday the Republican caucus in the Legislature does not have a stance as a whole on legal pot.

But Singer suggested another avenue: Ask voters in a referendum whether to legalize pot.

Asked if the Republican caucus is on board with a referendum, Kean said: “We’re going to look at that.”

Sweeney said he has to talk to state Sen. Nicholas Scutari, D-Union, about whether a referendum is a good idea. Scutari is the main Senate sponsor of the legal marijuana bill.

“The only problem with a referendum is: If you make mistakes and you need to make changes, the only way you can make changes is through a referendum,” Sweeney said. “It makes it too rigid.”

“If you do it legislatively, you have the ability to move quickly to fix it,” he added.

Scutari did not immediately return a message seeking comment.